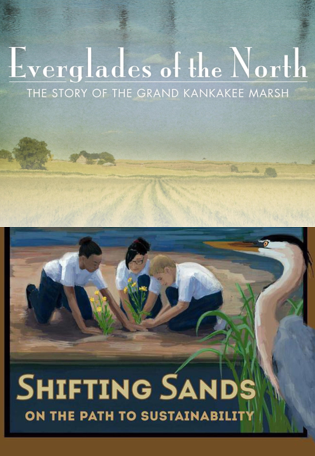 Two of Pat Wisniewski’s finest films about our region.  This is an excellent opportunity to see these films.

Everglades of the North: The Story of the Grand Kankakee Marsh – “This award-winning documentary reveals the diverse ecology and controversial saga of the Grand Kankakee Marsh – an area in the Midwest that, less than a century ago, resembled the swamplands of Florida’s Everglades. Join the filmmakers as they explore the astonishing history of the environmental treasure often referred to as the “Everglades of the North.””

Shifting Sands, On the Path to Sustainability –

Along the south shore of Lake Michigan, at the crossroads of America, a globally rare environment collided with the industrial giants that built our nation. This collision, over a century-old, gave rise to some of the most influential environmental conflicts of the 20th century, and became a microcosm for one of the most pressing issues of our time: sustainability.  How do we maintain our way of life without destroying the natural world on which we all depend?

Shifting Sands: On the Path to Sustainability tells the story of how one region, where rare plants grow in the shadows of smokestacks, sparked a movement for a national park; a movement which eventually led to game-changing environmental policies with worldwide impact and unique partnerships on the path to a more sustainable world.

Thank you Pat Wisniewski for permission to share these films.

Become one of the miller 500

Help us pay our monthly operating costs by subscribing for $10 or $20 per month automatically. This stable cash flow support from our community demonstrates to funders and grantors that our mission and purpose are valued and appreciated by you.